It might still look like a big hole in the ground, but work on the new GO maintenance facility in Whitby continues apace.

Train 15 minutes late? No worries, the Ontario taxpayer will foot the bill. But, if you live in the north of the province, your one train per day was just too darn expensive and has been axed altogether.

I have long thought that the GO service guarantee was an unfair perk for residents of the Toronto area, especially when you consider the cutbacks to transportation in northeastern Ontario, where even a late-running passenger train would be an improvement. Geography aside, doesn't a fare refund take money out of much-needed infrastructure improvements?

Three years on, the ONTC isn’t safe yet

Three years on, the ONTC isn’t safe yet

Three years ago this week, the Ontario government announced its plan to begin the divestment of the Ontario Northland Transportation Commission. Although the government had since changed its mind and has pledged its support for the publicly owned crown agency, the future of the Commission its employees is far from secure.

Thomas Blampied, author of Call of the Northland, a book about the failed divestment plan, remains concerned about the future of northern Ontario’s transportation system.

“I am heartened that the government backed down from the divestment of the ONTC, but I am increasingly worried about the shape that the ‘transformation’ process is taking,” the author, who continues to follow the ONTC issue, explained.

Citing the recent announcement that the Matheson and Englehart bus stations will close in May, Blampied worries that transportation links in the north are far from secure.

“It’s one thing to cancel the Northlander and leave a bus service to pick up the slack. But it’s a totally different story to begin shutting down bus stations along that route. What’s next?”

Although Premier Kathleen Wynne has been more supportive of the ONTC, the government remains slow to provide real support for the North Bay-based crown agency.

“The government says it is committed to a publicly owned ONTC, but the Commission is shedding jobs in the refurbishment division due to the lack of work – work that the provincial government could be providing.”

Commenting on the announcement of a new board at the ONTC, which is to be chaired by former Timmins Mayor Tom Laughren, the author was cautiously optimistic.

“I’m glad that a new board will be in place at the ONTC soon and, while I know that ‘transformation’ means job losses and restructuring, it’s important that the ONTC isn’t cut back to the point that it can’t deliver the services people in the north rely on.” 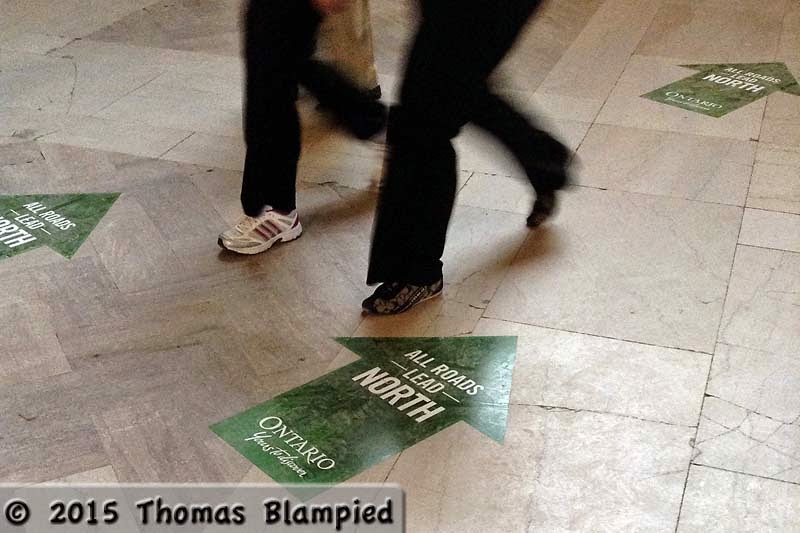 A few weeks ago, there was a large mining convention in downtown Toronto, complete with lots of execs who looked like they had never been anywhere near a mine. As part of the publicity, Ontario Tourism put these labels on the floor of the Great Hall in Union Station and I simply had to photograph them. The message is priceless: all roads lead north, because there sure as hell isn't a train to take you there!
Posted by Thomas Blampied at 11:45 am

Email ThisBlogThis!Share to TwitterShare to FacebookShare to Pinterest
Labels: CAN_Rail

Headline says it all.

For several months, I have been following the progress of Our Home and Miniature Land, a project which aims to recreate scenes of Canada in HO scale. When they announced an open house in March, I jumped at the chance to tour the work.


While largely reliant on model railway supplies, much of the work is being done by architectural design firms, which gives a crisp and precise feel to the dioramas. To date, the Toronto scene is nearly complete, while the Hamilton and Welland Canal scenes are slowly being developed.

While HO scale trains look good going around a small home layout, it is only when you can fill an industrial building that you can appreciate what full-length model trains look like. As for the buildings and scenery, they are immediately recognizable as Toronto, with such landmarks as the CN Tower, Skydome, Union Station, the Distillery District, and the Bloor Viaduct. As a whole, the scene is really wonderful to take in, and the details close-up are just as delightful.

To see more photos of the work, see my full album of photos: https://flic.kr/s/aHsk8RDE4o.

The full project will take several more years before it is ready to open to the public. Until then, I'm hoping for more open houses so I can check back on the progress.
Posted by Thomas Blampied at 6:35 pm

Transformation means changes. That said, it seems that the layoffs continue.

>>>Union discouraged by threats of more ONTC layoffs<<<
Posted by Thomas Blampied at 9:00 am

After several years of uncertainty, it appears that the Algoma Central Railway, operating between Sault Ste Marie and Hearst, is safe. Under a new deal, Railmark will take over operations of the railway from CN. Not only does the deal expect to reduce the line's need for government subsidy, but it should make the "remote rail service...self-sustaining within five years." This sounds quite optimistic to me, and I am a little wary of what a "higher-value purchase for passengers" would mean to non-touristy trips, but I am pleased to see that the Algoma Central should continue to serve the people and communities who rely on it for their link to the world.
>>>Railmark finalizes agreement to run ACR passenger rail service<<<
Posted by Thomas Blampied at 5:24 pm

Ring of Fire road proposal to get $785,000 government study

Does this mean no rail?