Having announced the impending closure of two bus stations, the transformation of the ONTC continues apace. Former Timmins mayor Tom Laughren has been recommended to take over as chair of the new ONTC board, which will replace the transition board implemented in March 2012 during the divestment attempt. While it is expected that current chair Ted Hargreaves will remain on the board, Laughren would bring a staunchly pro-ONTC voice to the fore.

>>>New board, chair announced for Ontario Northland<<<
Posted by Thomas Blampied at 9:38 am No comments:

The route map for the 2015 Pan Am Games Torch Relay has been released and shows a glaring omission: apart from North Bay, the entirety of Northeastern Ontario is missing! Rather than follow the Highway 11 corridor, the route opts to go via Sault Ste. Marie and Sudbury.

Normally, I wouldn't care about the route, and I certainly don't care about the games, but as the transportation network in the northeast of the province continues to shrink, I can't help but feel that it is being forgotten by the rest of Ontario.

Email ThisBlogThis!Share to TwitterShare to FacebookShare to Pinterest
Labels: Canada

Ontario should subsidize bus companies in the north: Greyhound

The province may be sleepwalking into a serious public transportation crisis.

>>>Ontario should subsidize bus companies in the north: Greyhound - CBC News<<<
Posted by Thomas Blampied at 6:11 am No comments:

Email ThisBlogThis!Share to TwitterShare to FacebookShare to Pinterest
Labels: ONR_Sale

When Ontario Northland and the Ontario Government announced the "transformation" of ONTC services in April 2014, people expected that the uncertainty would end. Unfortunately, it appears that it will continue. As of May 22, Englehart and Matheson will lose their bus stations and New Liskeard, Kirkland Lake and Sudbury will see reduced hours at their stations.

When the Northlander was cancelled in September 2012, the silver lining was that all the towns served by the train would continue to have full bus service. While the buses will still be running, the stations will be closed.

Is the future of public transportation in the north secure? I don't know.

This past weekend saw the windchill in the Toronto area push temperatures to below -40c. In the rail industry, however, tempers were really heating up after a lengthy list of problems.

Starting at Canadian Pacific, the railway's 3,000 engineers and conductors (represented by the Teamsters) walked off the job over unresolved issues surrounding breaks and rest between shifts. CP continues to run limited trains using its minimally-experienced management scab crews. True to its anti-union stance, the Canadian Government is expected to table back-to-work legislation Monday morning, effectively negating any power workers still had.

As a result of the CP strike, about 19,000 commuters in the Montreal area have no ride to work since the Agence Métropolitaine de Transport relies on CP crews to run three of its commuter lines. AMT is providing 60 buses to provide an alternative service, but that is less than 10% of what is needed.

Over on Canadian National's tracks, 29 cars of a crude oil train derailed in a very remote part of northern Ontario. Seven of the cars caught fire. Since there is no road access to the site, cleanup will be slow and delays significant.

As a result of the CN derailment, VIA Rail was forced to cancel trains 1 and 2 between Toronto and Winnipeg since the route was blocked.

To top it all off, VIA train 64 broke down near the outskirts of Montreal. In what appears to be a thoroughly botched response, the train sat without head-end-power for over three hours even though VIA's Montreal Maintenance Centre was relatively nearby. An investigation is underway.

All in all, it was probably a good weekend to stay at home.
Posted by Thomas Blampied at 10:19 am No comments:

This isn't really rail-related but, as readers of Call of the Northland will know, activist writing and footnotes can go together. I have been helping to organize a roundtable discussion at the University of Toronto on February 24. Professors + Publics: A Roundtable on Academic Activism will explore how activism and academic work fit together. 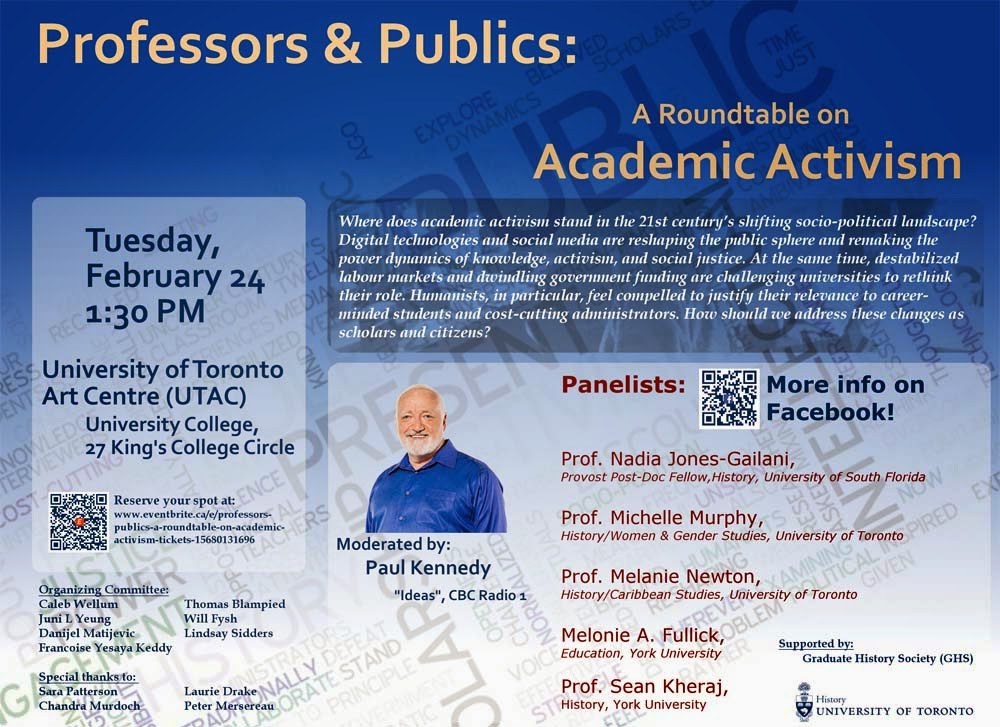 The panel includes:
The roundtable will be moderated by the host of CBC Radio's Ideas, Paul Kennedy.

The discussion takes place at the University of Toronto Arts Centre at 1:30pm. You can register for free here.

It promises to be an interesting afternoon. Join us if you can!
Posted by Thomas Blampied at 9:26 am No comments:

Email ThisBlogThis!Share to TwitterShare to FacebookShare to Pinterest
Labels: Academic

Will they? Won't they? They won't.

City eager to work with chiefs on rail link

Despite the provincial government insisting that the ONTC is not for sale, the Mushkegowuk First Nations is still looking to partner with TGR Rail to extend rail transportation beyond Moosonee to the Ring of Fire. Now, the City of Timmins has signed on, pledging its support for the proposed project, while also suggesting that the city would be an ideal location for a chromite smelter.

How things change! Native groups asking to buy the ONTC, the provincial government refusing to sell. Since 2012, there has been a complete reversal of positions.

>>>City eager to work with chiefs on rail link | Timmins Press<<<
Posted by Thomas Blampied at 8:30 am No comments: